The Power of Latino Advocacy

As we approach the first-ever Latino Advocacy Week in mid-March, the HAF conservation team wanted to share why we think Latino advocacy is so needed and why it has great potential to change lives for the better and increase equity in our communities.

Latinos are a growing segment of the U.S. population, and an increasingly active one. Every 30 seconds a Latino citizen turns 18, and as of 2020, 32 million Hispanics are

On the other hand, Latinos only make up 1% of elected officials, while comprising 18% of the U.S. population. Imagine what Latinos could do for the well-being of our communities if we had 18x the number of elected officials representing us! Running for office is an under-appreciated, but hugely impactful, way for one person to make a difference in people’s lives and on the issues you care about.

Latinos represent the largest untapped segment of the population when it comes to civic engagement and political potential. However, there are significant barriers that hinder Latinos’ participation in America’s democratic processes, including barriers of education and access. The intention of Latino Advocacy Week is to bridge that gap by providing the resources, training, and access to decision-makers that our communities need to learn how to advocate for themselves and their community.

To give an example of the potential, in the 2010s, HAF was new to the conservation space. It only took a short period of time (1-2 years, relatively quick in the policy world!) for us to begin adding a series of concrete policy accomplishments to our name, thanks to our organizing and advocacy efforts. Thanks to our work with the religious leaders of Por La Creación, HAF was able to protect new areas of land and increase park and nature access to the Latino community in several states.

Through holding events in the outdoors, writing letters to Congress, speaking at public meetings, engaging the media, and connecting our PLC leaders directly with elected officials and the White House, several National Monuments were created: the San Gabriel Mountains, Brown’s Canyon, Sand to Snow, Castle Rock, and Mojave Trails, and Boulder White Clouds. Through these campaigns, our leaders were able to meet President Obama in the White House and be present when he signed Monuments into existence.

During the Trump Administration, our leaders continued to engage, fighting rollbacks to pollution regulations and removal of land protections. We also campaigned to support the Land and Water Conservation Fund (LWCF), which funds parks, trails, sports fields, and swimming pools in every county of the US. LWCF was finally fully and permanently funded with the passage of the Great American Outdoors Act in summer 2020. Some campaigns take a long time to build to success, but are worth the fight.

We want to emphasize that Latino Advocacy Week is not just about conservation. We hope our community will raise their voices to advocate for lo que sea - whatever is most important to you. That might be healthcare, poverty, workers’ rights, immigration, policing reform, or anything else. Our potential is enormous–let’s go make a difference. Si se puede! 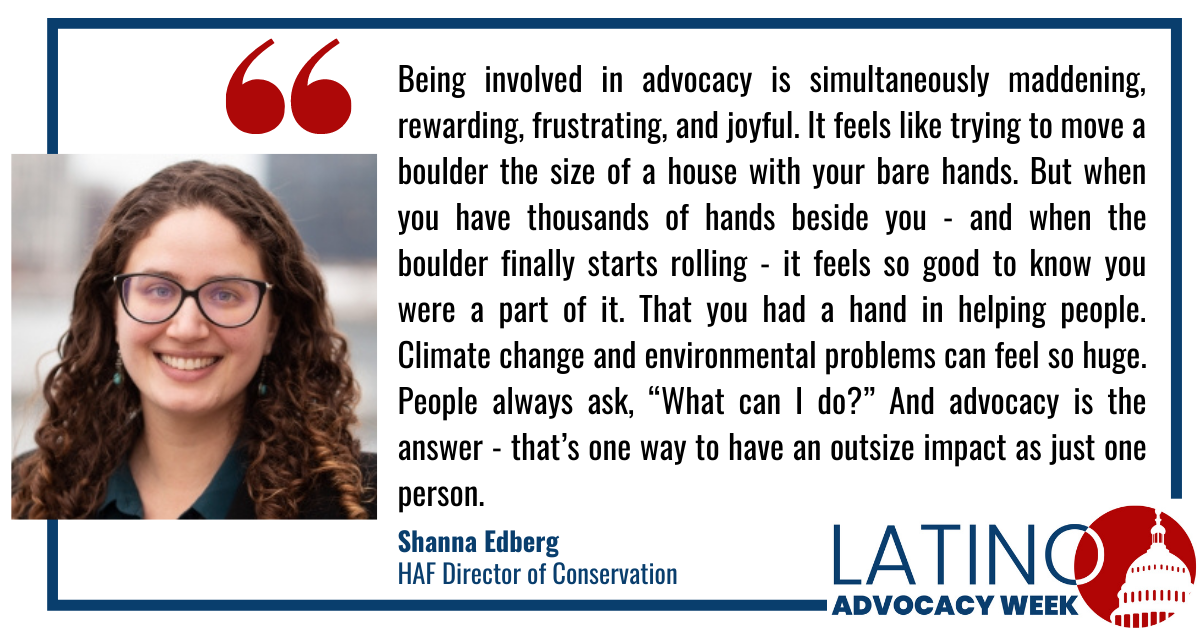 Being involved in advocacy is simultaneously maddening, rewarding, frustrating, and joyful. It feels like trying to move a boulder the size of a house with your bare hands. But when you have thousands of hands beside you - and when the boulder finally starts rolling - it feels so good to know you were a part of it. That you had a hand in helping people.

Climate change and environmental problems can feel so huge. People always ask, “What can I do?” And advocacy is the answer - that’s one way to have an outsize impact as just one person. 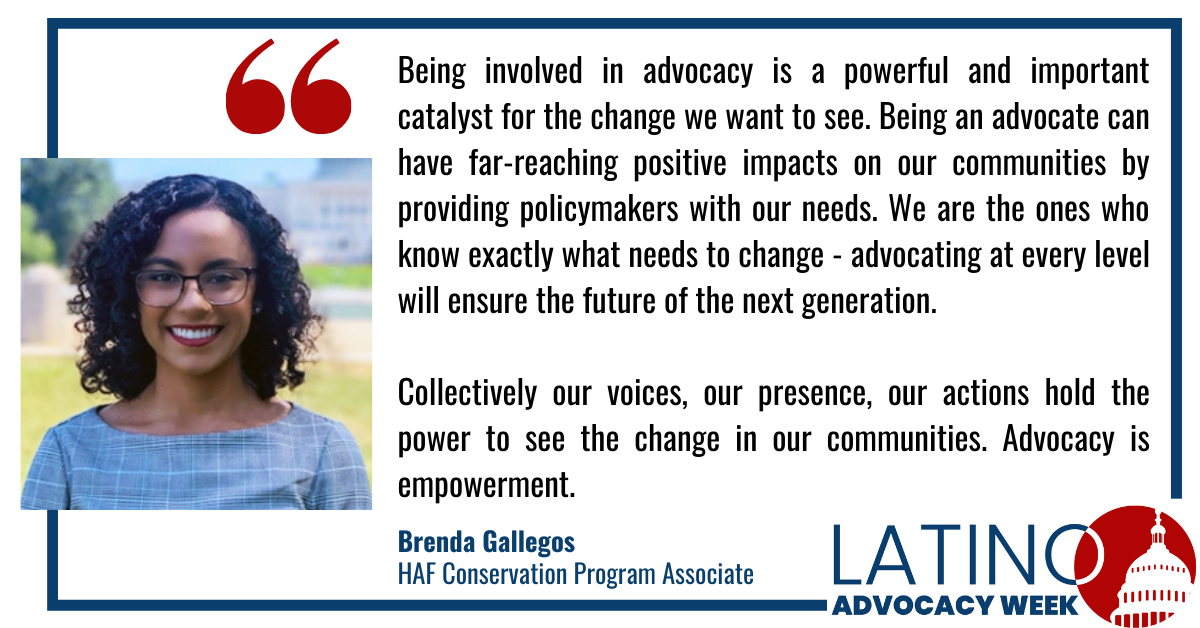 Being involved in advocacy is a powerful and important catalyst for the change we want to see. Being an advocate can have far-reaching positive impacts in our communities by providing policymakers with our needs. We are the ones who know exactly what needs to change - advocating at every level will ensure the future of the next generation.

Collectively our voices, our presence, our actions hold the power to see change in our communities. Advocacy is empowerment. 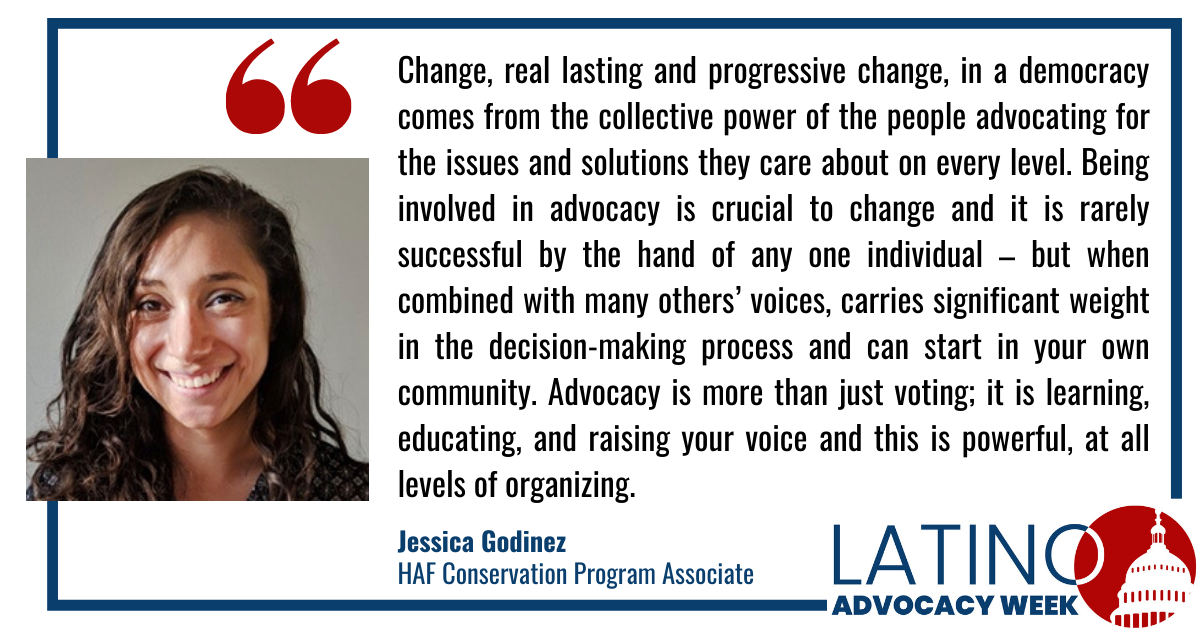 Change, real lasting and progressive change, in a democracy comes from the collective power of the people advocating for the issues and solutions they care about on every level. Being involved in advocacy is crucial to change and it is rarely successful by the hand of any one individual - but when combined with many others’ voices, carries significant weight in the decision-making process.

Every 30 seconds in the US, a Latino turns 18 and becomes eligible to vote. That’s a whole lot of voting power, if you ask me.

Contact Karina Meza at karina@hispanicaccess.org for information and interview contacts.

Latino Advocacy Week
is an initiative of Hispanic
Access Foundation.